A sucker for cuteness

The kids and I went shopping yesterday and met up with Stacy. Throughout the course of the day, Noah came to acquire 3 pennies.

We head for Target. Noah has been asking for a baseball glove for a while and he found one at Target. I told him that I wouldn't buy it for him but he wore it all through the store anyway. He kept telling perfect strangers that he was going to "take the glove to his home to play baseball."

We get the checkout and I tell him again that I'm not buying the glove and he needs to take it off. He goes with Stacy to a different checkout register. Apparently this is what happened next:

"Well, you have to pay for it. Do you have any money?"

Very excited with his eyes showing every bit of excitement "I do!!!"

He starts reaching in his pocket for his 3 pennies to give to the cashier. In his mind, he paid for it with money so he was ready to take it home.

Stacy was a sucker for his cuteness and bought him the glove. He's been wearing it ever since. He even took it to bed with him last night.

As I was checking out a few lanes away, I took a tag from Natalie that she has been chewing on and was quite content with. It was time to go and I didn't want to buy the shirt that was attached to the tag (don't worry, the shirt stayed dry). She opened her mouth to scream her discontent about losing her toy and I noticed a tooth that I hadn't seen before. She is teething a top tooth and apparently has already gotten the same tooth on the bottom. Well - well -well... that explains the SUPER fussiness that I've been dealing with for 2 days. Since it's so far back, I had no idea. I know the top tooth she is teething because her gum is a giant, painful, nasty looking, purple bubble. I can't wait for the tooth to break through. I bet she'll feel so much better. I'm in pain just looking at it!!!

She has started sleeping through the night. She'll go down at 7 and since Monday, has been sleeping until I get her up at 730-8. Most mornings I'll go in and she's laying there just looking around. She doesn't babble and talk like Noah so I never really know what time she wakes up.

Last night she woke to eat at 1030 but I think it's because she didn't eat dinner. Her gums hurt to much to chew and I didn't want "Battle de Pasta Primavera" again. A big bottle at bed and another at 1030 was fine with me. She was awake and looking around at 830 when I went in this morning.

She sat up by herself yesterday. I've been waiting for it for weeks and really try to focus on her when I see her trying to sit up. I want to see it happen!! I layed her in the floor to change her diaper as Dave was leaving for work. Dave comes back in and says, "Huh - the garage door was open all night and the cars are still out in the driveway." I turn to him, smiling, and say, "We could have been murdered in our beds." When I turn back around, Natalie is sitting up, smiling at me. Oh man!!!! I'm right here and it only took a second to turn. I didn't even turn around completely; I just turned my head. Darn it!!! Oh well... she hasn't done it again so maybe I'll see it next time. :)
Posted by Smiling at life... at 12:37 PM
Email ThisBlogThis!Share to TwitterShare to FacebookShare to Pinterest

I'd like to think I won because the bowl is nearly empty but looking at how much she is wearing, I'm concerned she won. She has been wiped down 3 times since the battle started. Imagine how bad she'd look if I hadn't wiped her down at all. 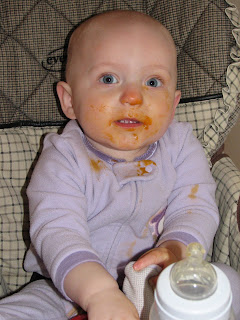 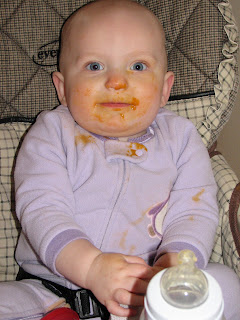 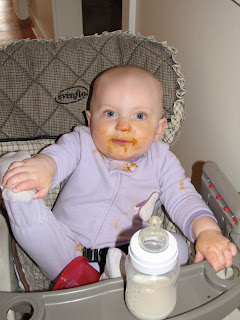 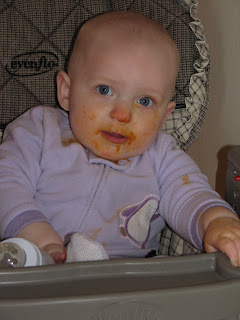