On Friday, as the kids and I waited at the airport for Dave to get home from New York, a man approached me and if I was Mrs. -----. I said, "No, but I could be. Did I win something?" He proceeded to tell me that he was waiting for a soldier returning home from Afghanistan. He had never met the soldier's wife but knew they had 2 small children and, since Noah and Natalie kept asking "how long before dad gets home?", he thought maybe I was the soldier's wife. Well, now my "did I win something" didn't seem to funny anymore. He then told me that the soldier coming home had served with his son in Afghanistan and then pointed to a picture pinned to his jacket and said, "My Jesse didn't make it home! He was killed last November." I shook his hand and, with tears in my eyes, thanked him for his sacrifice and how grateful I was for his family and his son's sacrifice. He had such a positive attitude towards the experience. He explained to me, "How can I be sad? My son saved 3 men's lives before he died. The last man he saved had 3 kids at home - 5, 3, and 3 months. The soldier had never met his baby and because of my son, that soldier saw his child. How great is that and how can I be sad knowing that my son did that for them?" I was so awe struck by his positive outlook on the situation.
As we were leaving the airport, I stopped to shake his hand and say "thank you" one last time. As I was walking away, he yelled for me and handed me a flag he was holding. He said, "I want you to have this. This is one of the flags that flew at my son's grave. I want you to have it - for your kids to have it so they'll know the story of my Jesse. His name is Jesse Snow. He's from Fairborne and he was given a silver star. Look for his story." I was so honored to be given that flag.
I told Noah and Natalie "That man's son died while fighting that bad guys and he was helping to keep you safe. He saved 3 of his friends' lives before he died!" Now, when Natalie comes into my room, she will see the flag and sometimes yell, "THE AMERICAN FLAG!!!!" I hope someday my kids will have the full perspective of what that flag means and the sacrifices that go with our safety and freedom. It was instilled in me as a kid and I intend to instill that in my kids, too. I am so grateful for the opportunity to meet John Snow and hear Jesse's story.
Posted by Smiling at life... at 4:33 PM
Email ThisBlogThis!Share to TwitterShare to FacebookShare to Pinterest

Noah got hurt on Saturday while playing on his scooter. On the way to church on Sunday, he said, "Mom, you want to know why I didn't get hurt worse yesterday when I fell on my scooter?"
"Sure!"
"God took care of me so I only got hurt a little bit instead of a lot hurt."
"That's right. God always takes care of us!"
I was so proud - I must be doing something right!!
"I know. A long a time ago at church we talked about how God makes us better when we get sick or hurt. The teachers asked us to tell a story about a time that God made us better or someone in our family better when we were sick."
"Oh really?"
"Yes, I told them that when I first born out of your belly, I was really sick and almost died but God made me better and I wasn't sick anymore."
"NOAH!! Why would you tell them that? That's not true!! You weren't sick when you were born!!"
"It's okay, mom. I just made it up!"
So much for my proud moment!!
Posted by Smiling at life... at 9:24 AM
Email ThisBlogThis!Share to TwitterShare to FacebookShare to Pinterest

You're getting your ass handed to you!!

Dave has been traveling a lot lately. He was in Orlando for a week, home for a week and now he's gone again - day 2 of 8. Before he left, I told him about some trouble I'm having with the kids and he said, "You're getting your ass handed to you!" Well, that's putting it lightly!! So, now Dave is in the middle of "no cell service" Yosemite with his dad and I'm having my ass handed to me with no back up or reinforcements.

Noah gets up by himself between 7-730 and is pretty self-sufficient. He can make himself a bowl of cereal and a glass of milk and watches tv until I get up between 830-9 when Natalie gets up.

We had a breakfast issue yesterday so when he came in this morning to ask if he could go outside, I asked him what he ate for breakfast and he said "Nothing."

Now, there are several things wrong with this response..... He doesn't know that I heard the cabinet doors slamming, he doesn't know that I'm pretty familiar with his eating habits and I know he eats as soon as he wakes up, andhe doesn't realize there is food stuck to the side of his face!

So, I said, "You didn't eat anything? I heard the cabinet doors slamming."

"Well, I didn't eat anything."

"Noah, don't lie to me! What did you eat this morning?"

"I didn't eat anything!"

"Noah, there's chocolate on the side of your face!! What did you eat this morning and DON'T lie to me!!"

Deer in a headlight look.... "I ate chocolate."

My brain is now scanning the cabinet - where the hell did he find chocolate and why didn't I know about it ?!?

"Chocolate? Where did you get chocolate?"

"I found it in the cabinet."

"How much chocolate did you eat? Don't lie to me!"

He nods his head and goes back downstairs.

I came down to investigate this morning's breakfast issue (different from yesterday's issue) and I discovered that he has apparently helped himself to the smores stash that I keep on hand for fire pit nights and it was "like maybe 4" because, again, Noah doesn't realize I can see what is in the trash... 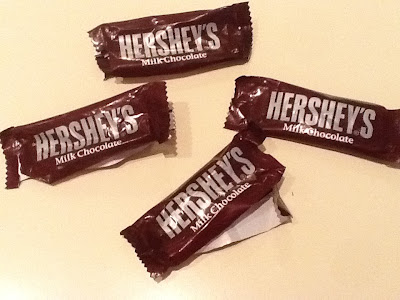 Posted by Smiling at life... at 11:22 PM
Email ThisBlogThis!Share to TwitterShare to FacebookShare to Pinterest

"Hi, this is ..... from ........ elementary school." ((very long pause like her name was enough to tell me what she wanted. I've never heard the name before so there's an even longer pause))

Her: "Is Noah out sick today?"

Her: "Well, he's not here." ((her tone implies that it's perfectly normal to put a kindergarten-er on the bus but never show up at school - my tone becomes panic because it's NOT normal!!))

Her tone becomes annoyed - with a heavy sigh she says: "Hold on!"

I wait - my heart has dropped to my stomach and stopped....

Her: "Never mind. It was the child below him on the roster." (her tone is as if this happens everyday - as if it's perfectly normal to "lose" a child)

Oh - okay - well thanks for the reassurance!!!!
Posted by Smiling at life... at 4:02 PM
Email ThisBlogThis!Share to TwitterShare to FacebookShare to Pinterest
Newer Posts Older Posts Home
Subscribe to: Posts (Atom)