Well, that was a disaster!!!

The kids and I have had one of those days. Noah is out of control to say the least. For example: He decided when he woke up from his nap that he needed to spit. He's never had this urge before but today, apparently, he had to spit so he leaned over the ottoman and spit in the floor. So, now you have a better idea of the day I've had.

I really want a hamburger - not Wendy's or McDonalds - a "grilled at home" hamburger. I mistakenly have the idea to take the kids to the store for dinner stuff. Mistake but we make it home in one piece. Dave is golfing tonight and even though I've never grilled hamburgers before, I figure, "How hard can it be? I can grill chicken pretty good. A burger is probably about the same." I debate calling Dave just to make sure but I hate calling him on the golf course. I never know if he's in the middle of a shot (or whatever it's called in golf). I start the grill. Because of the day I've had, I'm smart enough to buy the pre-pattied burgers. I season them and toss them on the grill and set the timer. I'm worried about them being under cooked since I don't really know what I'm doing but I figure I'll just check one before I turn the grill off.

The timer goes off and I go outside to flip the burgers. It's really smokey but they look okay. I go back inside and set the timer again. I glance out the window to see flames shooting out the back of the grill. Oh my!!! I don't remember seeing that when Dave cooks them. The fire is down as low as it will go. The only option I have is to turn the fire off but then they won't cook. I decide to leave it - thinking that it's just juice dripping down and making the fire flame-up.

When the timer goes off again, I head outside to a cloud of smoke. I can hardly breathe it's so bad out there!! I turn the fire off first thing to prevent flare-up. I don't know if grills work the same way as a pan but I'd rather be safe than sorry.

I open the grill and am amazed at how black the burgers are. Oh well - so much for a decent burger!! :) There are 4 patties and one looks edible. I'll see what I can manage for the other 3.

So much for being worried about them being under cooked. I put the one closest to edible on a hamburger bun for me. The kids like their burger cut up so I'm sure I can manage something for them. I am able to scrape some meat from the center of 2 of the patties. The pieces end up being the size they need to be for the kids and just enough to split between the two of them. The fourth patty is beyond anything...I'm not even sure I can cut into it! I hope Dave picks up something for himself on the way home from golf. There's no way this is going anywhere. I'm smart enough to know that even the garbage disposal can't handle this one. 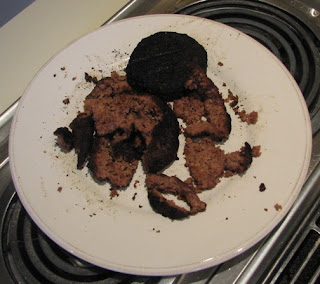 As I eat my well-done burger and the kids eat their burger pieces, I think back on my day and figure I can sum it all up with this... "Well, that was a disaster!" That pretty much covers my day and dinner all in one.

Noah decides he's still hungry. Of course he is!! Of all the nights to want a second helping. He keeps asking if he can eat a bagel and since there's no more edible hamburgers, I say yes. Bagel for dinner it is!

After the kids finish eating I send them to the carpet to play. I eat a few bites of ice cream and think to myself, "I can't wait to be 60. My kids will be grown and have kids of their own. I will bask in their stories and think 'what goes around - comes around!' "
Posted by Smiling at life... at 6:24 PM
Email ThisBlogThis!Share to TwitterShare to FacebookShare to Pinterest
Newer Post Older Post Home