I was sitting in the blue rocker in our room on the phone to mom. Noah was playing in his room and exploring the nursery which only had a dresser and a futon in it. I kept hearing the dresser drawers open and close but just kept talking because there really isn’t anything in there for him to get into or get hurt. All of a sudden it got really quiet. That’s never a good thing with a mischievous 19 month old running around.

As I was walking towards the nursery, I see out of the corner of my eye, that he’s not in the nursery but in the bathroom. The “dresser drawers” I was hearing was actually the paint tray hitting the floor as Noah was picking up the paint roller full of paint – not just any paint – 2 day old, thick, primer paint Dave had used to paint the ceiling a few days earlier and never cleaned up.

Noah was so excited that he painted the wall like daddy. His eyes were as big as quarters when he excitedly and loudly said, “Paint!!”

My initial thought was that he was in trouble. As I counted to 10 – being 8 ½ months pregnant – I realized I shouldn’t be mad at Noah. It was Dave’s fault…I’ll be mad at Dave. He didn’t clean the paint up when he was finished with it. As I finished counting to 10, I realized I can’t completely blame Dave. I left the bathroom door open.

As I assessed the damage, I see paint on the new rug the I just bought 3 days earlier, hand lotion in the toilet, paint on the new towels, and the paint he put on the wall, because it was so thick in the tray and partially dried, has given our walls a nice texture.

My first thought was, “Dave’s gonna kill him.”

I called Dave at work to find out where the camera was. He asked me what was wrong. I wouldn’t tell him and just kept saying I would send him pictures. He had a meeting in a few minutes and I had to hurry. He was worried something was wrong. I took pictures and, as I was trying to pull them off the camera, Dave called. He had to get to his meeting but he hadn’t gotten any pictures yet. I quickly pulled 2 pictures and sent them to him. As I waited for a response on the other end of the phone line, I just kept telling him, “Nobody’s hurt. Don’t be mad.”

“How much is this going to cost to fix?”

“It’s something we are going to do anyway. We may just do it sooner than we would have liked. Don’t be mad.”

“The email just got here."

I hold my breath as I wait for his response – the moment of truth.

He opens the email and laughs. What a relief – Noah will live to see another day!! 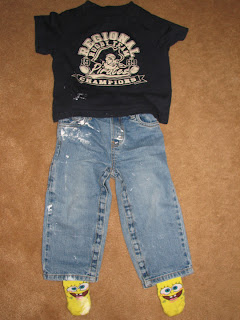 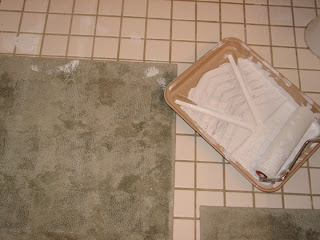 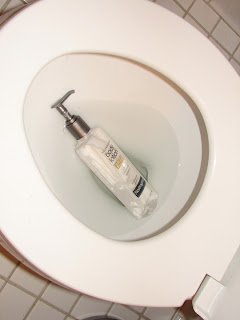 Posted by Smiling at life... at 7:09 PM
Email ThisBlogThis!Share to TwitterShare to FacebookShare to Pinterest
Newer Post Home