Natalie has been waking up between 1 - 2 with bad dreams. Sometimes she works it out and sometimes I have to get up with her. This has been going on for a few weeks. Last night was no exception.

As I come out of the room to head towards her room, Noah is coming down the hall. I stop him and put him back in bed. He says he wants to go downstairs. I explain that it's still dark so we can't go downstairs; it's time to sleep. He proceeds to ask me about fixing the laundry room door because there are monster's. Okay - he's still waking up from a bad dream. I tell him that Dave fixed the laundry room door and it was fine. He wants me to lay down with him. I tell him that I have to take care of Natalie but I'll come back.

I take care of her and get her back down. I climb in bed with him and his eyes are as big as quarters. He's looking around - clearly still scared from his dream. I tell him to go to sleep. I figure I'll lay there for a few minutes until he falls back to sleep. A few minutes later his eyes are still wide open. I decide to get my pillows and hope for the best. I can't get comfortable because he sleeps in the middle of the bed and he uses flannel sheets. It's going to be a long night...boy - oh - boy is it ever. Just as he is about to fall asleep, Natalie wakes up again. I have to get out of bed to take care of her which wakes him from his near sleeping state. They "tag-team" me for almost an hour and a half.

At 8, Noah comes in to wake me because "it's time to get ready for school." I lay there, trying to wake up knowing that once I get moving, I'll be fine.

I get up. I get Natalie up. We head downstairs. Noah is eating a bowl of cereal and I get Natalie settled so I can make my mocha. It's a school day and we have to be loading up in the car by 8:40. If we aren't in the car by 8:40, I will have to take him into school. With the way the day is starting, I accept the fact that no matter how hard I try, today I'll have to take him in so I get changed into jeans/t-shirt. At 8:50 we load up in the car and rush out of the garage to head off to school. However, in my rush to back out of the garage, I didn't pay attention to how close the Jeep was to the door frame of the garage and I broke the passenger side mirror... "oh, sh*t!" I break down in tears. My day is not starting out well and doesn't seem on a track to get any better. I"m covered in mocha, we're late for school and I just broke the mirror... "oh, sh*t!" Noah asks me why I'm crying. I tell him that I'm having a bad day and dig my phone out of my purse. 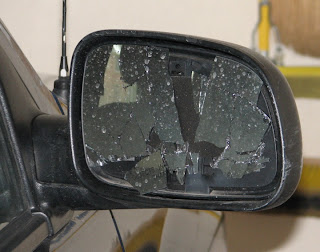 I call Dave and find out - "now what?" He assures me it's an easy fix because the mirror is still attached to the Jeep; fixing the broken glass is easy. "Take Noah to school. You're day will get better."

I change into dry clothes and we're off again. I drop Noah off at school and hear him telling his teacher, "My mom broke the mirror on her car."

I head out to pick up a travel booster seat for Natalie. It's about 15 minutes west but I figure it will just enough time to pick up the seat, rush home for a shower before I have to pick up Noah.

I arrive at the woman's house to pick up the booster. I ring the door bell - no answer. I knock on the glass door - no answer. I ring the door bell again - no answer. I"m starting to get really upset. After the way my morning has been working out and I've rushed all the way over here and now she's not home. I knock on the front door - no answer but I hear noises inside so I think someone must be on their way to the door. I hear the garage door open so I lean around the corner. The woman looks at me like she has no idea why I am standing at her front door. I ask her if she's selling the booster seat. She's very surprised and runs in to get the seat. Apparently she forgot I was coming. If I had been 60 seconds later, she wouldn't have been home at all. Seeing that me catching her before she left, my luck for the day must be turning.

I drive home and as I'm get Natalie out of her seat my phone rings. It's school...

"This is Angie. I wanted to let you know that Noah's okay but he ran into the wall in the gym. He has a bump and you need to come pick him up."

I buckle Natalie back into her seatbelt, and we're off to school. I call Dave. "I'm on my way to pick Noah up from school. He ran into the wall in the gym and has a knot on his head."

"What do you mean he ran into the wall?"

I walk into school thinking I had seen enough knots on Noah's head to know that he'll be fine. I walk into the school office..."OH MY GOSH!!!!"

I have never seen a bump so big. I'm told the bump has gone down a lot since it first happened 25 minutes prior. If it's gone down a lot, how big did it get...the thing is HUGE!! 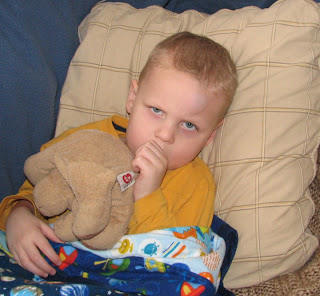 (an hour and a half later) 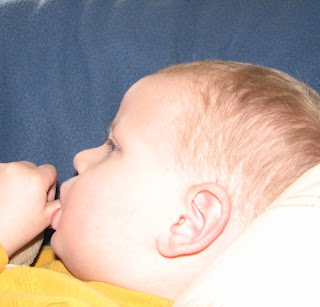 For the next 6 hours, I am on constant Noah watch. It seems that Natalie's take on the whole situation is: Noah's laying on the couch watching TV and is unsuspecting of my sneaky ways. I'll take the opportunity to attack.

His teacher called later this afternoon to check on him. She explained that they were playing "Stop. Go." (3yr old version of red light/green light) When they said "stop", he was going faster than his feet could keep up so when he stopped, he fell into the wall. As much as "running into the wall" made sense because he is related to me, it didn't quite make sense how it happened. Now it makes sense - he didn't run into the wall, he fell into the wall.

We survive the next few hours and by 4, Noah and Natalie are running laps through the house. Whew - we survived another day.
Posted by Smiling at life... at 9:37 PM
Email ThisBlogThis!Share to TwitterShare to FacebookShare to Pinterest
Newer Post Older Post Home