Ever feel like God's trying to tell you something?

We've had a rough week! Sunday night Dave took Noah to the ER. They got home a little after 3 but Natalie was up all night so Dave and I are were pretty sleep deprived on Monday. Noah had a dr appt at 115. It was originally scheduled as a check-up for school but the timing was great because of the weekend ER visit. Dave went into work late so we both left at the same time. I headed westbound to the dr and he headed eastbound for work. About 3/4 of a mile onto the highway, the Jeep suddenly jerks. In an instant I think we've been hit but in the same second, I realize the Jeep has lost all power and I'm losing speed quickly. I merge over into the emergency lane. I call Dave who turns around and heads our way and then I call the dr to say we aren't coming. The kids did great as I stared out the window in a daze - why is this happening right now?!?! This is not good timing, God! Dave shows up and tries to start the car. Yep - it won't start. We load everything up into the Subaru and head home. It's nap time for the kids and goodness knows we need it. Dave drops us off, looks up the Jeep code on the computer to see what's wrong with it, heads to the parts store and then back out to the Jeep so see if he can work on it there or have it towed home. The Jeep starts!! He rushes back home and we all load backup into the car and pick up the Jeep. He takes the Jeep and we head home in the Subaru. We make it almost all the way home before it quits working again. We're in the subdivision next to ours so we're off the main road but not close enough to push it home. We head back to the house. Dave drops us off and goes back to the Jeep. He's trying to work on it but the engine is really hot and the part is hard to get to. After a few hours of back and forth, it starts. He jumps in and drives it home. He bicycles back to the Subaru and hopefully he will probably have better luck at working on the Jeep. It has started to rain but since the Jeep is now in the garage, the rain doesn't matter. By now, it's too late in the day to work on it given the late night we've had the night before. We decide that I'll drive Dave to work so I can have a car to take the kids to the dr.

Tuesday is, for the most part, non-eventful. Natalie is so sick but Noah is feeling much better. Natalie's temperature hasn't been below 100.3 since Monday morning. The dr checks her out and says that everything checks out okay. We have to wait it out. We leave the dr and I have an hour to kill before Dave gets off work. I take the kids to McD for apples and realize Natalie is burning up!! She's complaining that she's cold but I have no way of taking her temperature. I don't have any meds with her for her fever so we head to Walgreens. I give her meds and Dave calls. I'm really worried about Natalie - she's nearly comatose. Her eyes are glazed over, her mouth is open and she's drooling. Noah keep touching and picking at her face and she doesn't budge. I call the dr and they say I can bring her back in. I have to pick up Dave first and when she sees him, she suddenly has life again. We figure she's tired because she's sick, not sleeping overnight and has missed her nap today. When we get home, Dave works on the Jeep and gets it working. We hope!!

Wednesday, we decide he'll take the Jeep and I'll drive the Subaru. If the Jeep breaks down, it's better if he's stranded than if I'm stranded with the kids. Of all days, Noah decided to sleep in today. It's a school day and I have to be there early to review the paperwork & epi-pen instructions from the dr. There's no way we're going to be there early but, if traffic is light, we'll make it to school so he's on time or just a minute or two late. Given the last few days we've had, I don't care that he's late so we aren't running around as crazy as we usually are. We load up in the car and head to school.

About a mile and half down the road, I see something running along a tree line that is perpendicular to the road. There's a deep dip between the road and the tree line so I figure I'm seeing the top of a dog's head. I think he's running towards the road to bark at the cars so I slow down but can't stop because of all the traffic. I"ll hope for the best if he darts out. At the last second, a deer, not a dog, that jumps the ditch and darts into the road. There's nothing I can do. If I veer right, the kids and I will go into a deep ditch that will surely roll the car. If I veer left, I'll get into a head on collision with the truck that's slammed on it breaks to miss the deer. If I slam on my breaks, I'm sure the guy behind me will plow into me. I slow down as much as I can and brace for impact with the deer!

I take out the back legs of the deer and see it spiral through the air into the woods next to the road. I get to a spot in the road that I can pull over and call Dave. Noah asked if I hit a squirrel. I said yes because I am not in a condition to explain why a deer ran in front of the car. He heard me on the phone telling Dave that I hit a deer. When Natalie asked "squirrel?" Noah said, "No. Mom bumped a deer." Um - I think bump doesn't quite do it justice but again, I'm not in a condition to explain "bumping" the deer.

The car seems drivable so I turn around and drive it home but it's making funny noises. I couldn't tell from looking at when I called Dave if the radiator was broken. The temp stayed where it was supposed to so that was a good sign. I get home and Dave comes outside. I sit in a daze in the driveway while he unloads the kids. The situation is starting to settle in. We could have been hurt or killed. It could have been so much worse. At the same time, I'm trying to figure what happened to the deer. You couldn't see it from the road when I drove back by but the woods are pretty thick but so thick that I wouldn't think it would go in the woods, either. Where did it go - that will be the eternal question. As I'm sitting there, car still running, my mind processing the last 15 minutes, the car starts to steam. Well, at least we made it home. They towed the car the shop and we have a rental for the next 2 weeks.

I asked Dave to drive back by later to see if I could at least tell where the deer went. I couldn't see it but based on where, in the road, I was when I hit it, the deer came pretty close to hitting a telephone pole as it spiraled through the air.

The airbag didn't blow which I'm glad but why didn't it blow? Apparently, according to the shop, I didn't slam on my brakes and come to an abrupt stop which is what is needed to trigger the airbag - or something like that.

After $3300 in damage and 2 weeks in the shop, we should have our car back - good as new! Hopefully the Jeep won't quit again any time soon.

We're staying home today and "Yes, God? You have my attention and I'm listening!!" 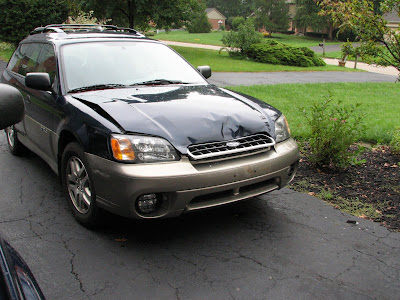 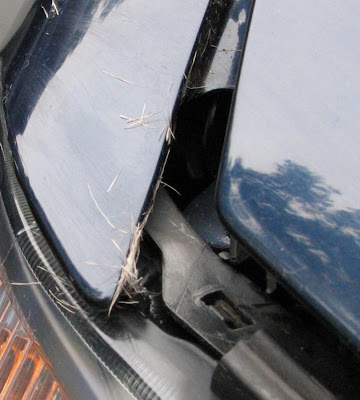