I'll be a firetruck

So it's been a whole month since I last posted. Things have been busy but thinking back on it all, I can't really figure out what it is that has kept me so busy other than being a mom of 2.

A few weeks ago, I was in the kitchen cooking dinner and Noah was rolling one of his ambulance Matchbox cars around the kitchen table making a siren noise. After a few minutes, the noise really starts to grate on me so I said, "Hey Noah, don't be an ambulance right now." He replies, "I'll be a fire truck." I heard Dave chuckling from the office. Noah's too smart for me!! :)

I remember clearly that it was a Thursday when I said, "Noah, you need a bath." He replies, "No (in a very sing song tone), Wednesday." Again, he's too smart for me! I laugh and said, "Wednesday is a whole week away. We should take a bath today." He says, again, "No, Wednesday." I decide that he's too cute and way too smart for me to try to outsmart. I'll try again later :)

Natalie is pulling herself to a standing position using various objects at her level. She likes to hang onto my fingers to stand up but she hasn't quite figured out the forward motion of her feet to take a step. She's learning and you can really see the wheels turning as she concentrates to figure it all out. 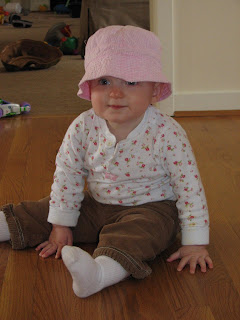 We are in California this week. Natalie was in the floor playing with one of the toys that Noah wanted. He bent down, took it from her said, "That's mine. You have to share." and walked away with toy in hand. We'll have to work on that "sharing" thing.

We've started a reward system with Noah. He gets a sticker for things like: laying still for a diaper, getting a diaper when we say without argument, using manners at the table, sharing and being nice to Natalie, doing things when we ask instead of arguing or trying to negotiate (yes, negotiate and he's only 2 - watch out world). After 8 stickers he gets a Matchbox car. It seems to be working and he gets really excited at the idea of a sticker. Sometimes he'll come up to me at random parts of the day and ask if he can have one. No - we need to earn the sticker. We're preparing him for warmer weather and potty training. Everyone says potty training is easier in warmer weather. I'll let you know if that's really true. In case you ever wondered: Matchbox cars seem to roll better than Hot Wheels :)

Noah colored eggs for the first time a few weeks ago. I forgot to take pictures. He really liked it and was cleaner than I thought he would be. One of the moms from one of our playgroups decided to be brave enough to let four 2 year old color eggs at her house. She was VERY brave!!!

The Easter Bunny came to the house for Easter and left a coloring book, a video and Starbucks cup "like daddy's" for Noah and a noise toy for Natalie. It was cold and looked like rain so there were no eggs to hunt. Maybe next year.

Stacy told Noah that a police man "drives a hoopty like daddy". A few days later Dave and Noah were heading to swim lessons when they passed a car on the side of the highway that had been pulled over. Noah saw the lights of the police car and said, "Police man drives a hoopty like daddy." Oh Noah - so funny!!
Posted by Smiling at life... at 3:21 PM
Email ThisBlogThis!Share to TwitterShare to FacebookShare to Pinterest
Newer Post Older Post Home